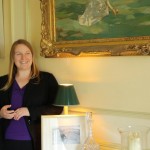 The Croquet Match by Sir John Lavery, 1893… I’m something of an art fan and in particular have always been enthralled by 19th century portraits and landscapes. The Castle has an impressive collection and at every turn there is another beautiful picture to enjoy. My favourites include ‘The Orchard’ hung in the Summer Bedroom, the Portrait of Sir Jack’s Sister, ‘Norina’ which you can see in the Drawing Room and of course ‘The Croquet Match’ painted by Sir John Lavery, which is on display in the Dining Room.

This last picture shows Sir Jack’s Grandfather, Sir John playing croquet with his sisters Edith and Nora, with the beautiful landscape of Largs as the backdrop to the game. You can see Sir Jack’s Great Grandfather and Great Grandmother sitting on the bench under the red parasol and the family’s boat moored in the water beyond. The other characters watching the game include Sir John’s third sister and a number of friends, clearly enjoying watching the game.

When asked to write a few words on ‘My Dundas’ this picture was without question my first choice. I spoke to a friend who works as a curator at a Museum for any information she could add from their records and the details she came back with were fascinating.
It transpires this picture was painted at the same time as Lavery was working on the large painting of The State Visit of Queen Victoria to the International Exhibition in Glasgow 1888. Apparently Queen Victoria was most reluctant to sit for the painting and talked to her ladies-in-waiting about flannel underclothes throughout!! Despite the headaches, this painting launched his career as a society painter.
‘The Croquet Match’ caught the attention of contemporary critics at the time, because of the lightness and brightness of the colour palette and it suggests the influence of Monet on Lavery, both in the use of colour, freedom of the paint handling and the choice of a modern, outdoor subject.
Sir John was a more patient sitter than Queen Victoria and took a great interest in the picture and indeed photographed Lavery painting the scene. These remarkable photographs, which can also be found in the Dining Room, hold a story of their own.
One of these photographs shows Sir John in the portrait standing upright with his mallet at his side. In the completed piece that we see hanging at Dundas his image is, in contrast, seen in the thick of the action. This was the result of Sir John’s concern that he looked too like a spectator and insisted that Lavery repaint his image. The other photo shows his sisters in their beautiful dresses enjoying the game, Edith on the left and Nora on the right. The camera and projector that Sir John used to take these pictures can be found in the Billiards Room.
Today, every time I step into the Dining Room, which was renamed the Croquet Room many years ago because of this picture; I am struck by how lovely it is and how lucky I am to be surrounded by such beautiful pieces of art.
‘My Dundas Castle’ by Lisa Muxworthy, Wedding Coordinator 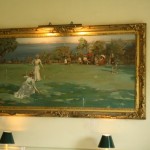 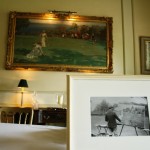 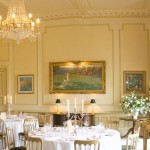